MonsterAGoGo
December 2017 in Your Collection
This is my first real post on here.  I'm on another poster site that I love dearly...but other's have urged me to check this place out, too....so here I am. The recent unpleasantness on Photobucket (blackmailing people to cough up money to allow their years of stored photos to be visible again) is one of the reasons I came here (just in case the other site ever goes dark). It's also the reason i started my own blog with my poster acquisitions and with "recreations" of my previous poster posts on that other site (a project that is still ongoing...UGH!). You can visit the blog HERE.  But here is the latest post (i.e. first post here) for my recent purchases. 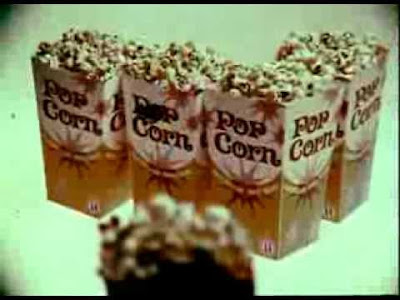 Grab your popcorn. It's time for the most recent update-a-go-go of my movie poster acquisitions. While this bunch is a lackluster batch for the most part, there are a couple (towards the bottom) I am excited about. Take a gander, if you please---or DON'T.
THE WIZARD OF OZ (3D re-release):
Here is the PG version of the recent WIZARD OF OZ IMAX 3D re-release. I have several copies already, but OZ is a classic and hello? This was only $2. How could I say no? This and the next few below were overlooked bargains from a recent auction of Rich's. Thank you, Rich. 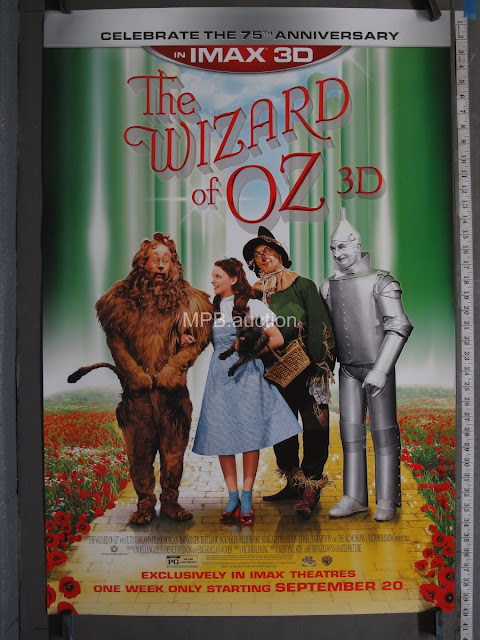 [center][img]https://3.bp.blogspot.com/-27fecglAOak/WjISqpYhZvI/AAAAAAAAJS0/LPhA-DtAVwsV8wFORQxMmq4r1msCrwqlwCEwYBhgL/s400/a2dc85d06fcd2323fd35f8da9a2368ac.jpg[/img][/center]
THE AMITYVILLE CURSE (Video release):
This was possibly the WORST flick in the AMITYVILLE series...until everyone with a camera started making their own movies. UGH! Still, as bad as this flick is, I did NOT have this video one sheet (although I do have the boring British movie theater one sheet). I just needed this to round out my collection---but could have done without it. it was only $5. 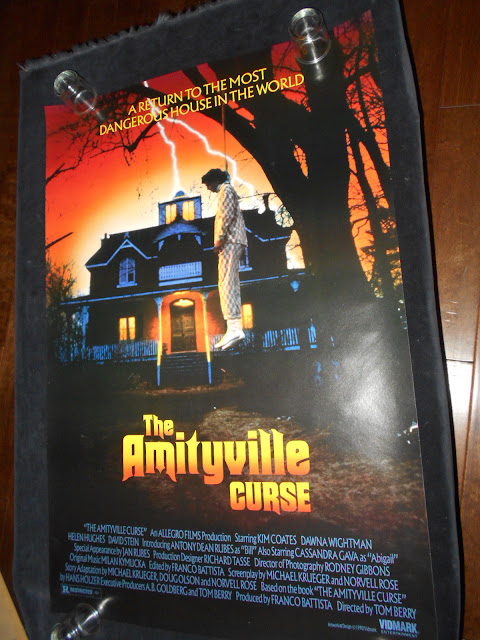 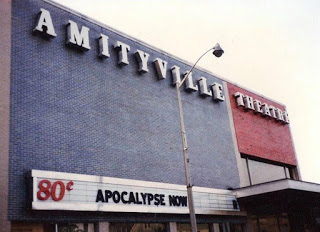 STAR WARS (Special Edition trilogy re-release advance):
I am no big STAR WARS fan. I saw the original (4-6) trilogy in the theater but only saw one of the prequels (1). I did enjoy the last two new films though and will probably see LAST JEDI (but not during the first crazed few weeks). I bid the minimum bid on this (and my other wins from Rich), thinking I'd surely be outbid on all of them (I was outbid on several other things). Somehow these were overlooked. Really? I thought anything STAR WARS was a must have. 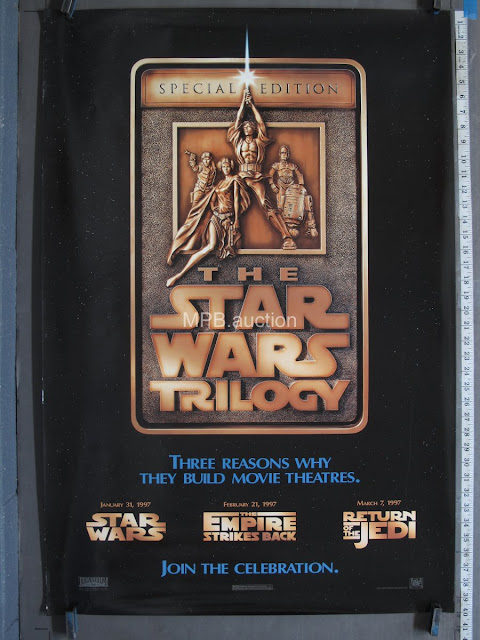 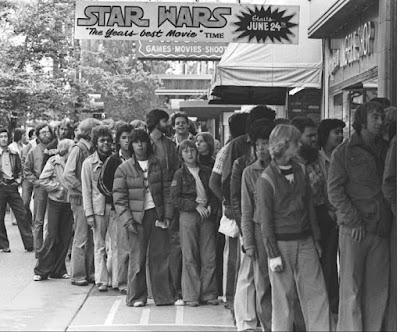 STAR WARS (trilogy DVD release promo):
Again, how did STAR WARS fans not go for this? Lucky me. I guess the Force was with me? 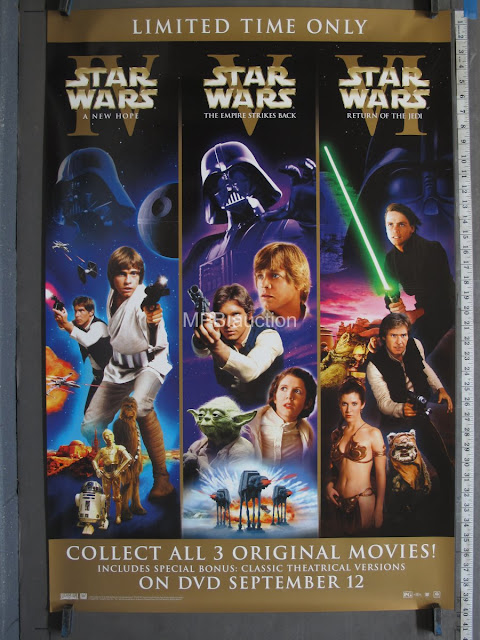 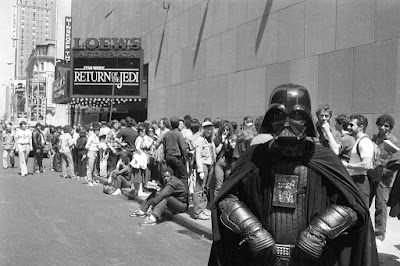 SWITCHBLADE SISTERS (re-release):
Quentin Tarantino's sponsored re-release of a 70s grindhouse classic otherwise known as "THE JEZEBELS". I have a copy or two already. Great exploitation art...even if it is a re-release. 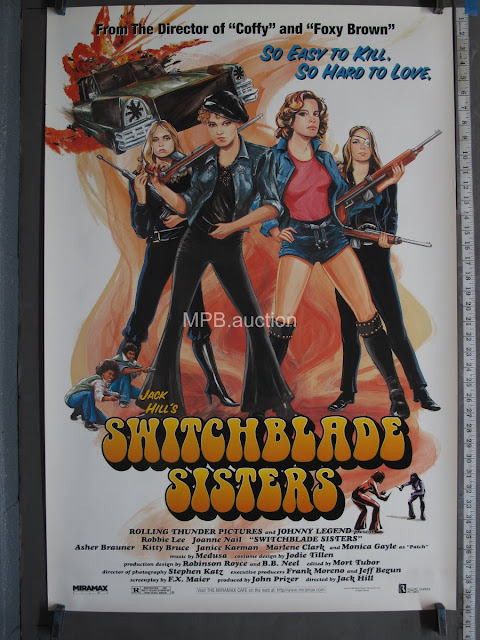 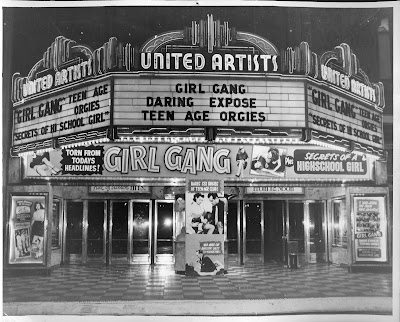 SANTA'S FANTASY FAIR:
I have a penchant for vintage kiddie matinee posters. Just in time for Christmas, here's another kiddie matinee poster---this time for a Christmas-themed mishmash. O' the poor children who had to sit through this crap. I'm sure they must have thought they were all on Santa's naughty list to have to be forced to endure this flick. Ha! 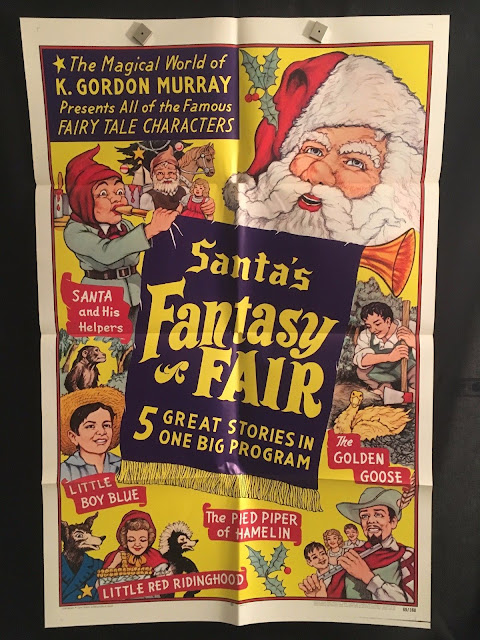 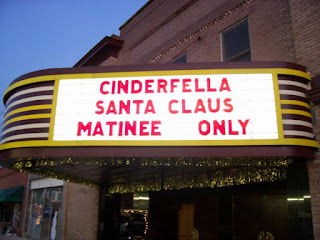 SAFARI CANNIBAL (aka INVADERS OF THE LOST GOLD) (French):
Here's an oddity I...uh, needed. Maybe. Maybe not. Whatever...  Laura Gemser, Edmund Purdom, Stuart Whitman, and Woody Strode altogether in a cannibal flick? WHAT!?! I just tracked this movie down on DVD (under the INVADERS OF THE LOST GOLD title---what kind of LAME title is that, other than something trying to rip off the first Indiana Jones flick in an awkward way). but I have NOT seen it yet. Sure to be awful---hopefully cheesy, too.CHOMP! 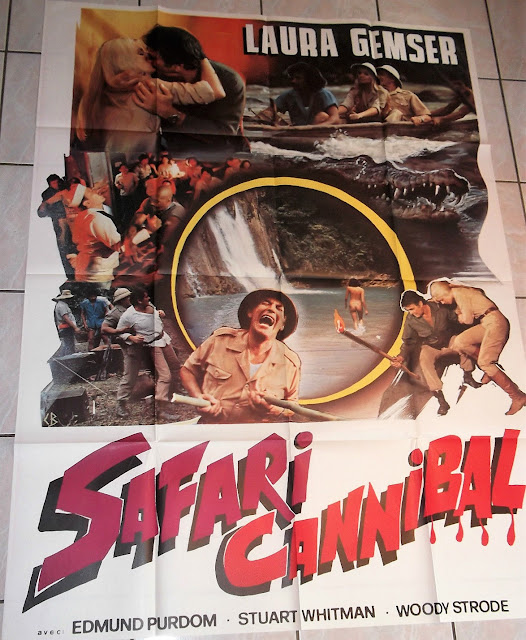 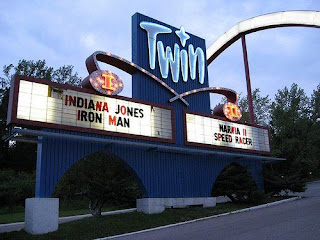 DRILLER KILLER:
Here is a sleaze classic I've been pursuing for a long while--"DRILLER KILLER"! Ha! This late 70's schlocker came with two styles of posters. One is black and has an evident "R" rating. This one (blue) features doodled drill bits going through the photos with cartoon blood oozing from them and is clearly NOT rated. The late 70's / early 80s were a great time for these unrated films---like the original "DAWN OF THE DEAD", "MANIAC", "ZOMBIE" and this flick. A lot of theaters, including a few where I grew up, treated these flicks as "R" material instead of reading the "No one under 17 admitted" blurb on the posters. Otherwise I'd probably never have gotten in to see them. (I had to drag my grandmother along to get in to see "DAWN OF THE DEAD". She hated it and walked out in the first 15 minutes or so and waited for me in the lobby the rest of the movie. Ha! What a cool lady to do that, though.) 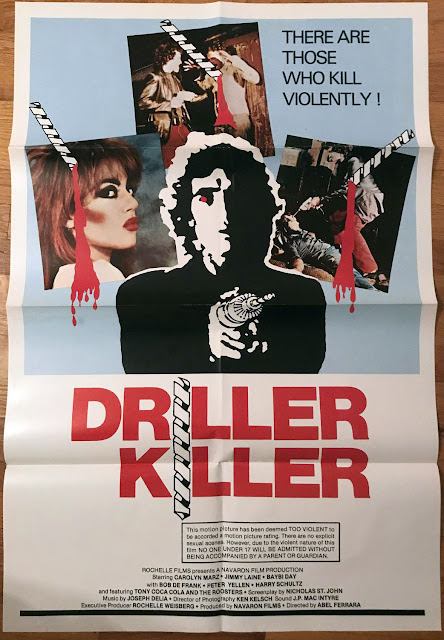 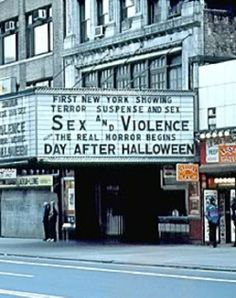 O.S.S. 117 IS NOT DEAD:
I've long been curious about the O.S.S. series, ever since seeing one of the posters for it. It looks like a James Bond knock off, but by debuting in 1958, it pre-dates the Bond films by several years (but not the Bond novels). I've never seen the films. Maybe someday? Nice poster though...Bond knock off or not. 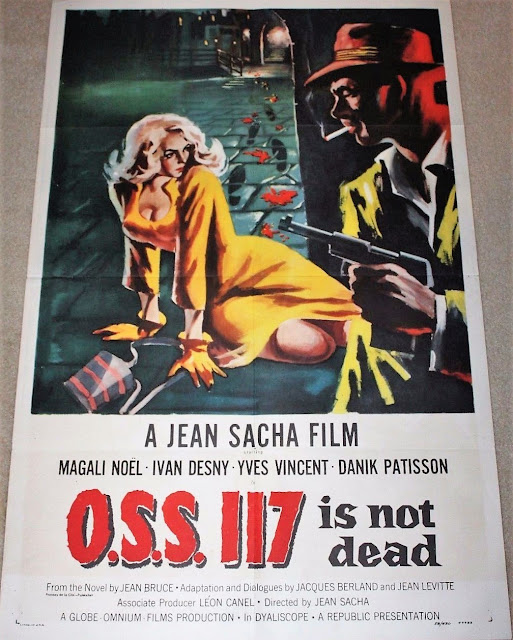 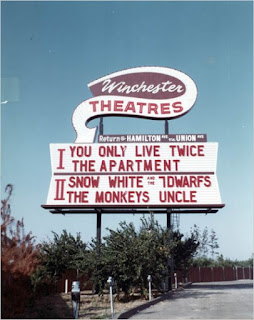 MANSFIELD 66/67:
Wow! Wow! WOW! Am I ever super-duper thrilled about this one. The other day, I happened to stumble on to something. It was a mention of a new movie about the last two bizarre years of Jayne Mansfield's life...when she was dating Anton LaVey (the leader of the Church of Satan). YES, that really happened. Anyway, there is a new bio about her coming out called MANSFIELD 66/67. The poster below is the better of the posters being used for the film. Notice anything about the poster (aside from Jayne and Anton)? Hello? The artwork was done by SHAG! (If you don't know SHAG... visit his website here: http://www.shag.com/ )
I found the official website for the film and wrote to every email address I could find on it, begging and pleading for a copy of the poster. I got this response:
Our distributor sent us your email about our Shag one sheet poster. That was done exclusively for our festival run and we only have 2 left from the official Shag sanctioned printing. We need to keep one for our office but could let the other go for $200. Let me know if that works and give me your address. We are leaving for NY for a week tomorrow but I could get it in the mail today if I hear back. You can PayPal me at ############.
It looks amazing in person!
Yours,
Todd
I responded with:
Hi Todd.
$200!?! Zowie! I had NO idea, but I LOVE the poster, I LOVE Jayne and I LOVE SHAG. When will your movie be out in wide release or on DVD/Blu-Ray? I MUST see it!
I'll send the money now.
Thank you so much.
CHEERS!
So I sent him $200.  It's a first run SHAG print of the poster and obviously super rare. SHAG's first (?) movie poster. I can't afford it---but I couldn't let it go either.  And isn't the title clever, having the "666" all be in diabolical red? Ha! Yahooooo! 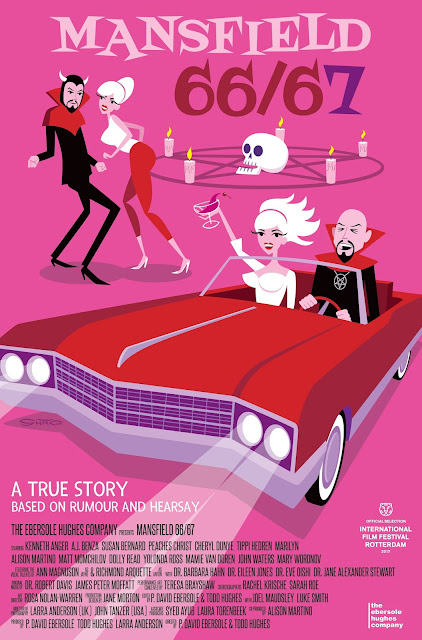 That's it for this post and for 2017. I hope you all have a happy holiday season. Merry Christmas and have a fantastic new year filled with adventure, success, romance, wonder, laughs...and incredible posters.
2017 is TOAST! 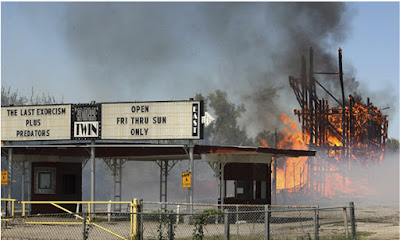 For movie poster collectors who know...