I love collecting RR and stock daybills; I find them a fascinating part of Aussie movie history. I've been thinking lately about the lack of variety of films in the stock daybills, though.

For example, these are the only 2 designs I've seen for this pretty damn great stock poster: 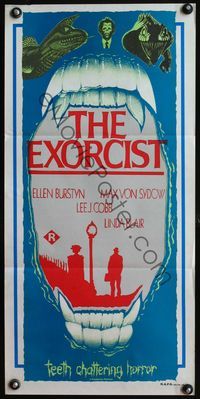 So why create a stock poster if they were utilized so infrequently?

Without knowing when 'The Exorcist' stock poster may have been printed (and I do have several other, different RR daybills for it), that's still a big chunk of time for this style of stock poster to have been available for use. It is a full size 13 x 30 daybill and it has the newer MAPS logo, placing it as being printed between 1975 and 1979. For reference, the original 'Exorcist' daybill (from 1974) has the older MAPS logo.

'The Exorcist II' was released in Australia in 1977, so it's reasonable to suggest that some cinemas might have played the original film as part of a double bill at the time. If so, it's possible that a RR daybill was printed at that time. My view is that, if there was such a RR daybill created, it probably would have been one of the others that I have and not have been the one pictured - due mainly to the lack of other films using that style of stock poster.

I think that this RR stock poster was created later in the 1970s.

Ultimately, the lack of use for this style of stock poster is likely to remain a mystery, but I'd love to hear your thoughts and especially find out of other examples of this stock poster exist!
0 · Share on Facebook Share on Google+ Share on Twitter