A lot of fan art can be pretty lackluster. Consider your typical “Game of Thrones”-inspired noodlings, or the fiction that wistfully imagines romantic interludes between Harry Potter and Hermione Granger. Sure, there are occasional gems, but most are more ode than art.

Perhaps the single form of fan art that consistently bucks the trend is the alternative movie poster. Created by artists outside Hollywood, these hand-drawn beauties are not only better than most fan art, they’re often better than the real thing.

To be fair, most official posters today aren’t made to be beautiful or even art — they’re made to sell tickets. In the ’90s, studios figured the best way to do that was to skip hand-painted posters in favor of gigantic photos of stars’ heads. The creators of alternative movie posters, however, don’t care about big heads or bottom lines. They’re concerned, often obsessively so, with reminding us just why we love these films so much.

The result: posters that are more treasured — and often considerably more expensive — than the official one-sheets. As soon as Mondo, the Austin, Tex., company most often credited with the explosion of alternative versions, puts a print on sale, an entire run can be gone in seconds; many fetch hundreds and even thousands of dollars on eBay. “I can’t think of another art movement where the unofficial stuff is worth more than the official stuff,” said Matthew Chojnacki, author of two books on the subject. “It’s like someone doing a knockoff of Keith Haring, and that becoming more popular than the original.

Many creators have become so popular that they’re also working for studios, on everything from variant posters (Tracie Ching’s prints for “The Jungle Book”) to Blu-ray covers (Marie Bergeron’s illustrations for Takeshi Kitano films). Last year, the illustrator Kyle Lambert created the official “Stranger Things” poster, his homage to classic hand-painted ones of the 1980s.

Today, there are galleries and digital archives (Repostered.com and AlternativeMoviePosters.com) devoted to the form. And then there are the books, like the “Crazy 4 Cult: Cult Movie Art” series, Mr. Chojnacki’s “Alternative Movie Posters” (being published in French by Akileos in October) and, this month, “The Art of Mondo,” a lavishly illustrated history of the company.

The artists are an eclectic and talented bunch. Here are seven to watch: 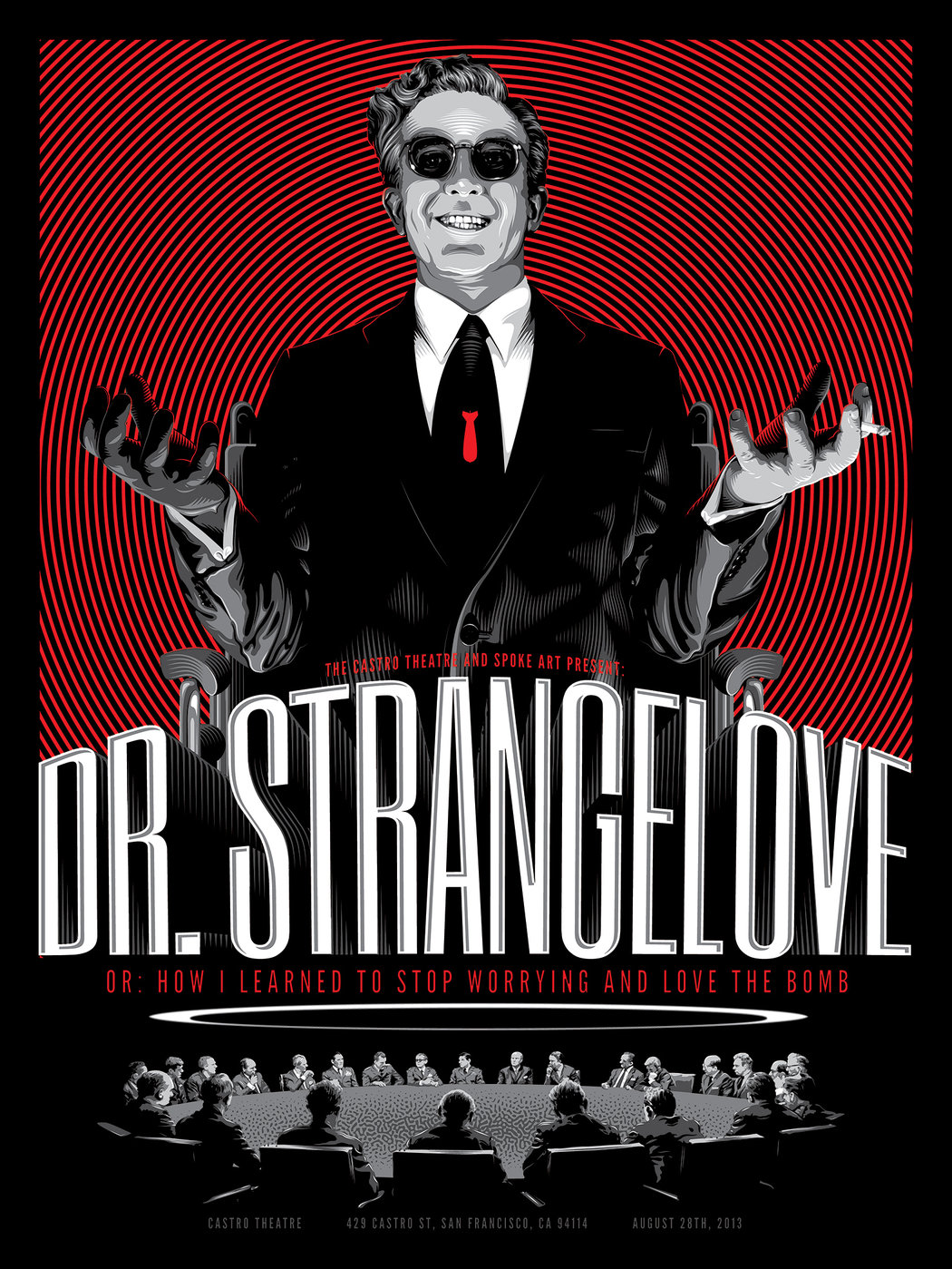 Ms. Ching has created gorgeous concert posters for Kings of Leon and graphics for small-batch beer cans (Brewdog Pump Action Poet). But it’s her vibrant, spellbinding movie posters that have led to work at Sony (“The Magnificent Seven”) and AMC (“Fear the Walking Dead”). “She does official stuff, but there are a lot of rules from the studios about ‘so-and-so’s face has to be so big,’” Mr. Chojnacki said. “So I think she’ll always continue to do the alternative stuff, just for her fans.” Among his favorites: her takes on the Stanley Kubrick classics “Dr. Strangelove” and “The Shining.” 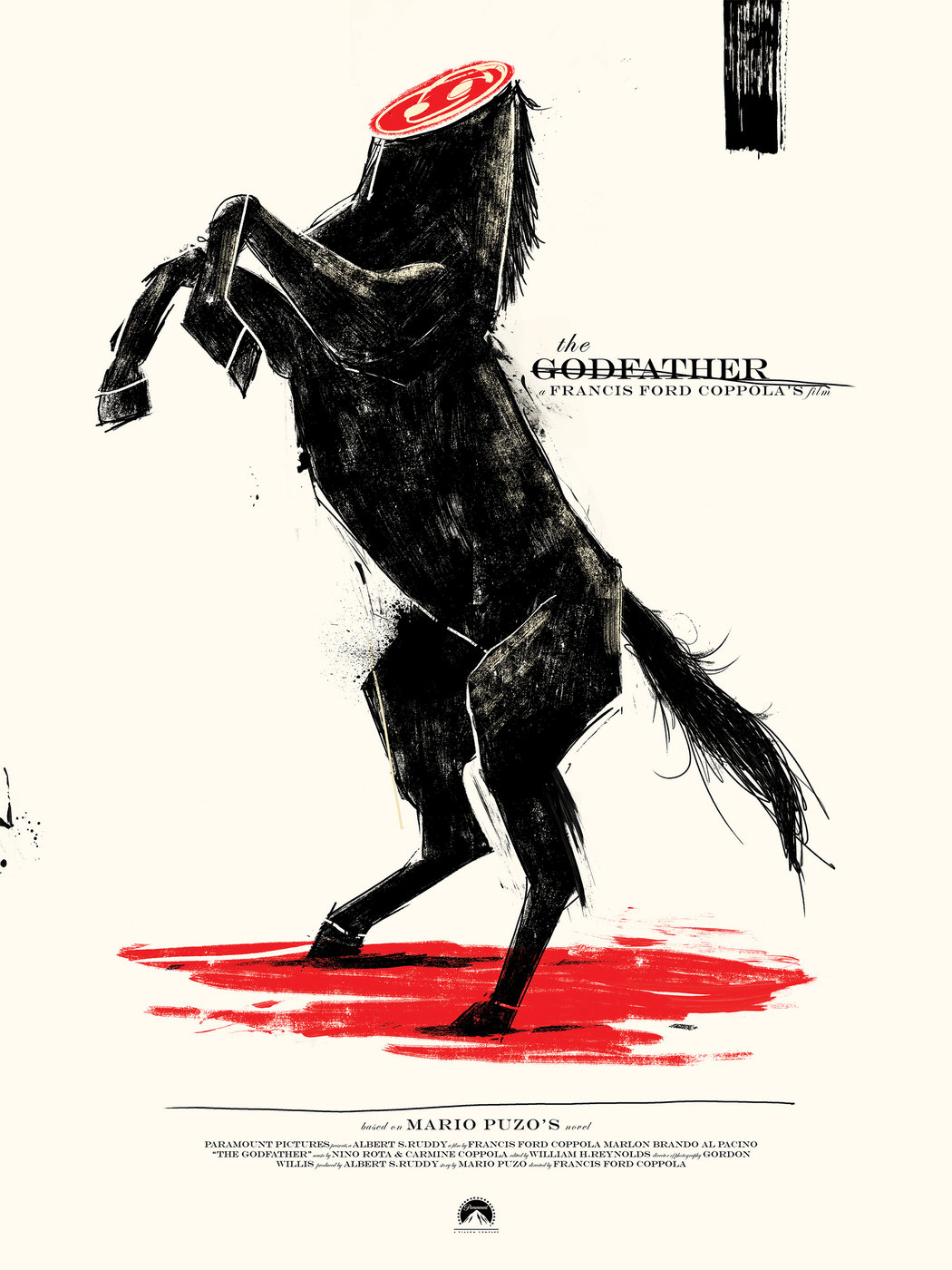 When Ms. Bergeron was enlisted to create a poster for “The Godfather,” she pictured a decapitated horse, neck bones exposed, rearing up on its hind legs. For “Apocalypse Now”: a lone soldier, making his way upstream through a waist-deep river of blood. Ms. Bergeron has created album covers, video-game-inspired triptychs, and a recruiting poster for Imperial stormtroopers (“Support the Boys in White”) for the Harper Design book “Star Wars Propaganda.” “She has a talent for painting emotions,” Mr. Chojnacki said. “Every time you see one of her posters, you know it’s her.” 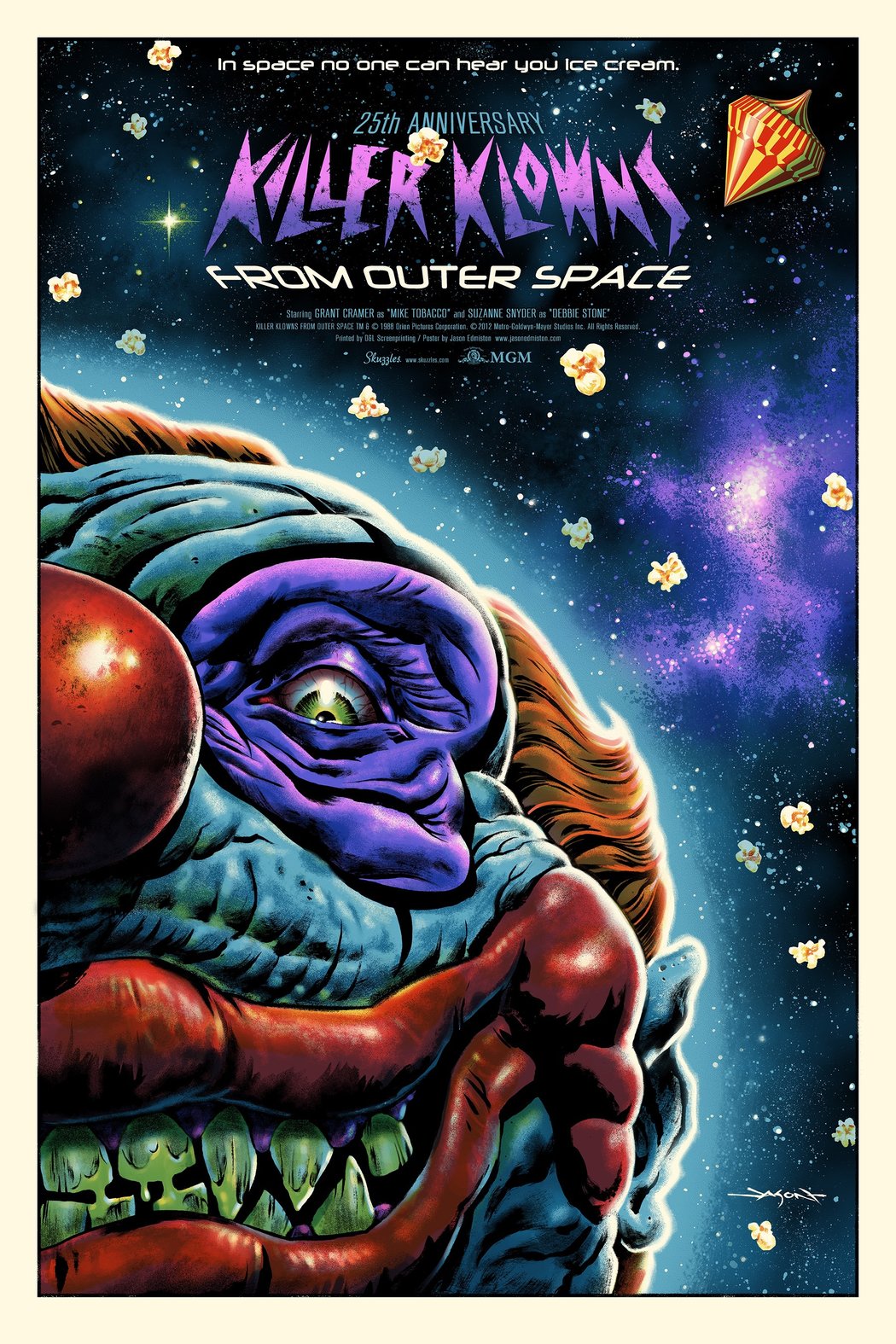 A lover of all things spooky, Mr. Edmiston has tackled chain-saw-wielding killers and the pantheon of Universal monsters. Among his best-loved works: his creepy, crayon-colored celebration of the Chiodo Brothers cult classic “Killer Klowns From Outer Space,” and his in-your-face take on John Carpenter’s 1978 slasher classic, “Halloween,” which captures the precise moment when Michael Myers bursts into the closet and starts stabbing. “He’s the guy I collected the most original art of,” Rob Jones, Mondo’s creative director, said. “Over my wife’s side of the bed is his ‘Bride of Frankenstein,’ and over my side of the bed is ‘Blacula.’” 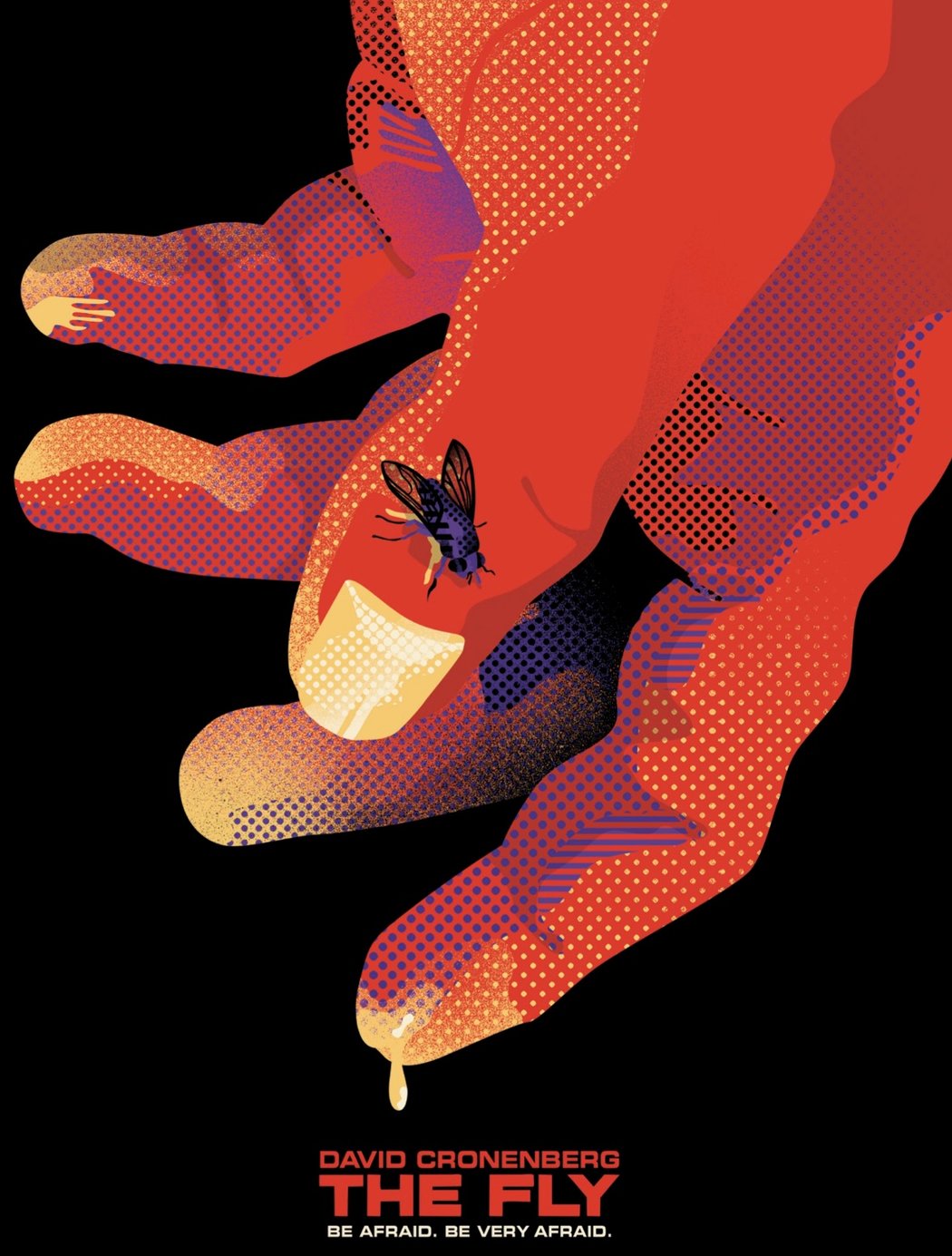 We Buy Your Kids

We Buy Your Kids is the Australian design duo of Sonny Day and Biddy Maroney, whose work has appeared on children’s books and album covers, premium cider labels and skate decks. Their style, reminiscent of 1960s Polish film posters, bear little resemblance to the originals, let alone works by their poster-producing peers. For the 1986 version of “The Fly,” the duo summed up one of the most viscerally disturbing sci-fi films in a single image of a finger dripping with goo. “That’s probably my favorite of theirs,” Mr. Jones said. “It’s gross and sexual at the same time.” 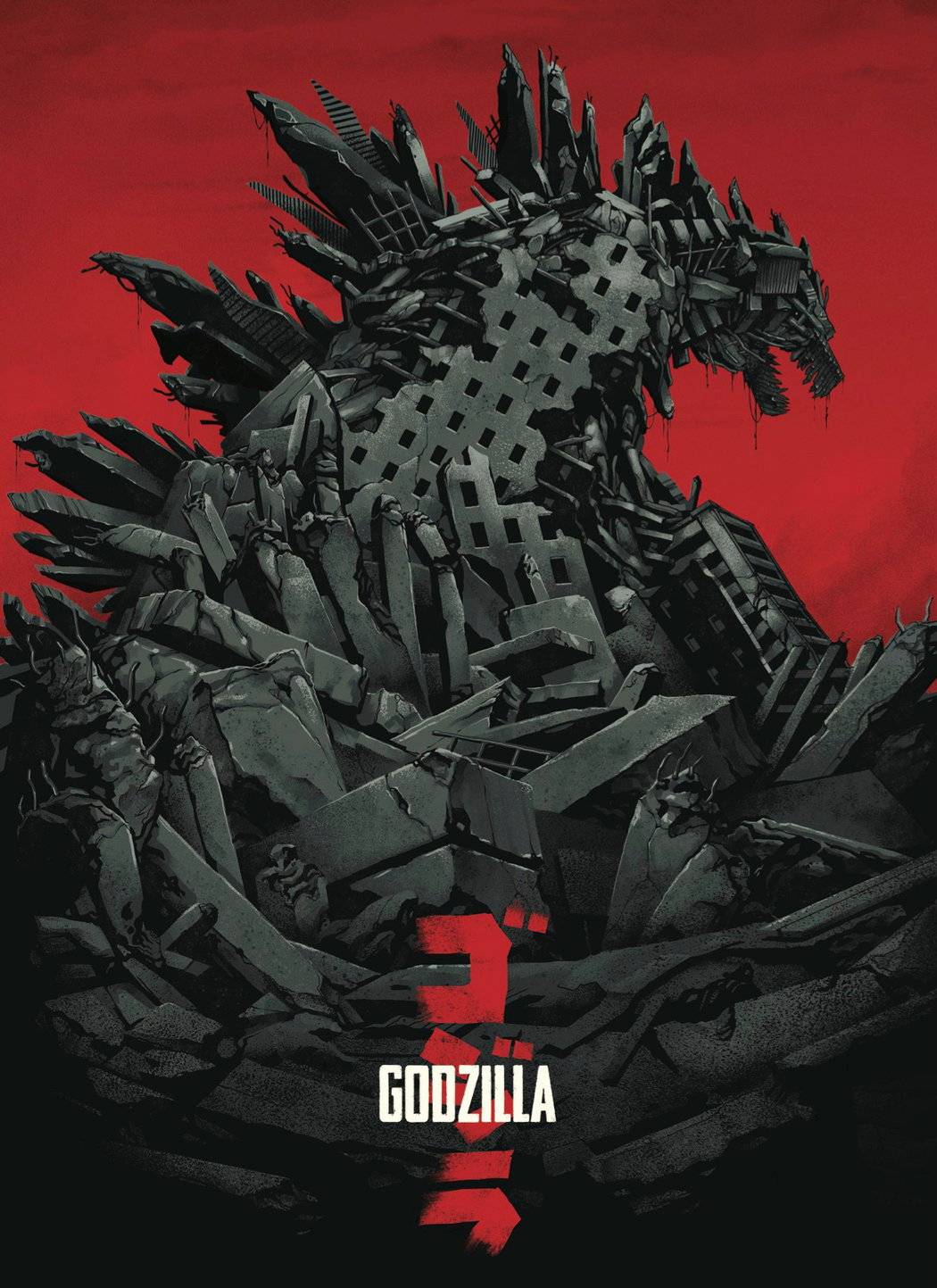 Justin Erickson and Paige Reynolds make up Phantom City Creative, whose recent commissions include a special edition soundtrack album for the A&E series “Bates Motel,” and a poster for a Christmas Day screening of Quentin Tarantino’s “The Hateful Eight.” For “Jaws,” Phantom City Creative envisioned a beach-facing window framed by a great white’s gaping maw. For “Godzilla,” Mr. Erickson captured the Japanese terror as a pile of wrecked buildings in one poster; in another, as a pillar of smoke and fire. “He even did a great one where he used the kanji for ‘Godzilla’” — the Japanese lettering spelling out the title — “and actually made it look like Godzilla,” Mr. Jones said. 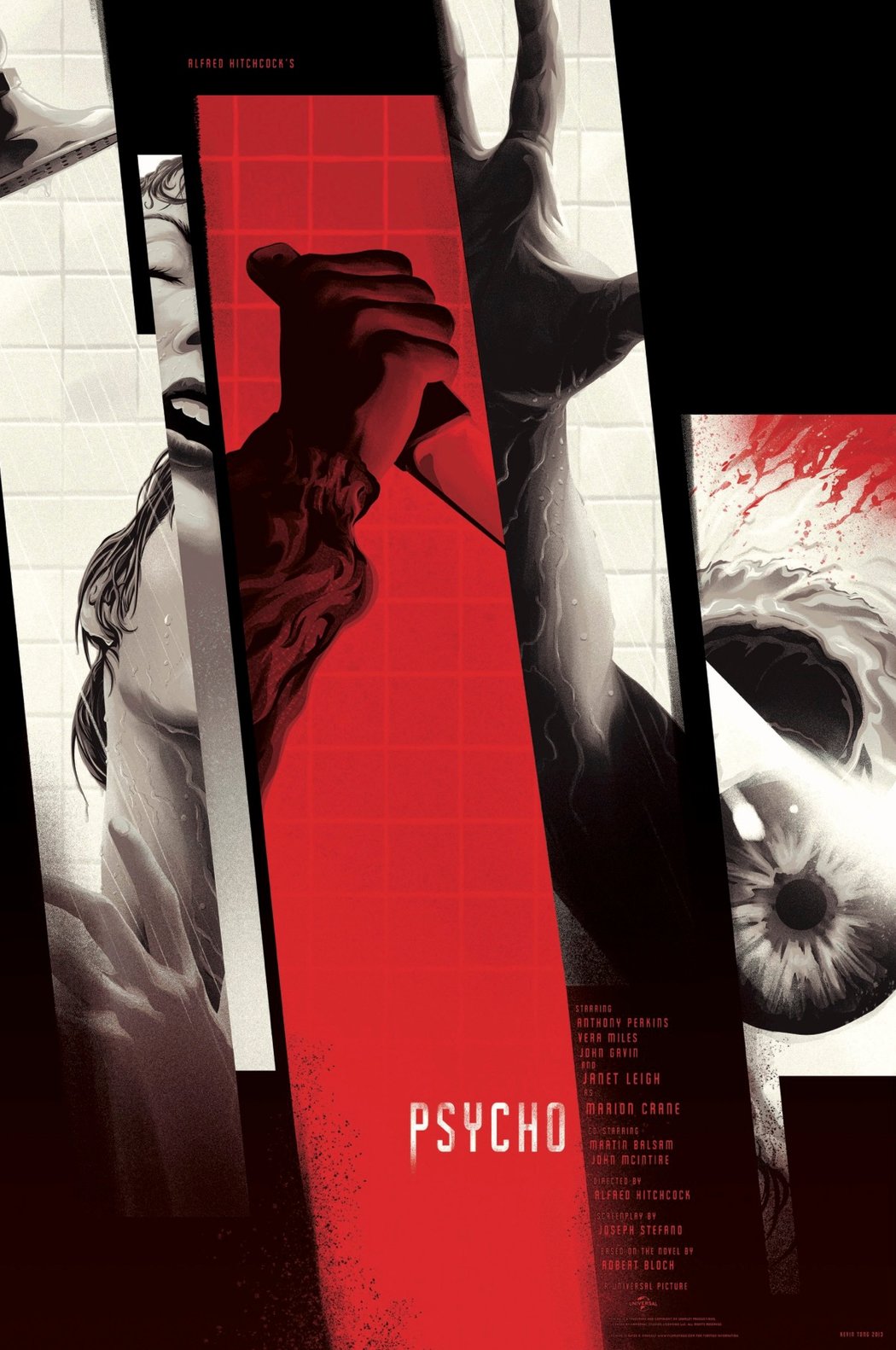 There’s a lot going on in a Kevin Tong poster. In his wondrous take on “The Wizard of Oz,” you get simultaneous glimpses of gloomy Kansas and the Emerald City, one in front of the other; in a commission based on Akira Kurosawa’s “Ran,” there’s an exploding, upside-down castle, an eerie ghost, and samurai and horses falling out of a blood-red sky. For the Mondo poster for “Psycho,” Mr. Tong reimagined Hitchcock’s iconic shower scene. “He was trying to show that entire scene, trying to mimic that experience of watching that scene in real time, but in a single image,” Mr. Jones said. “And he succeeded. You get a chill.” 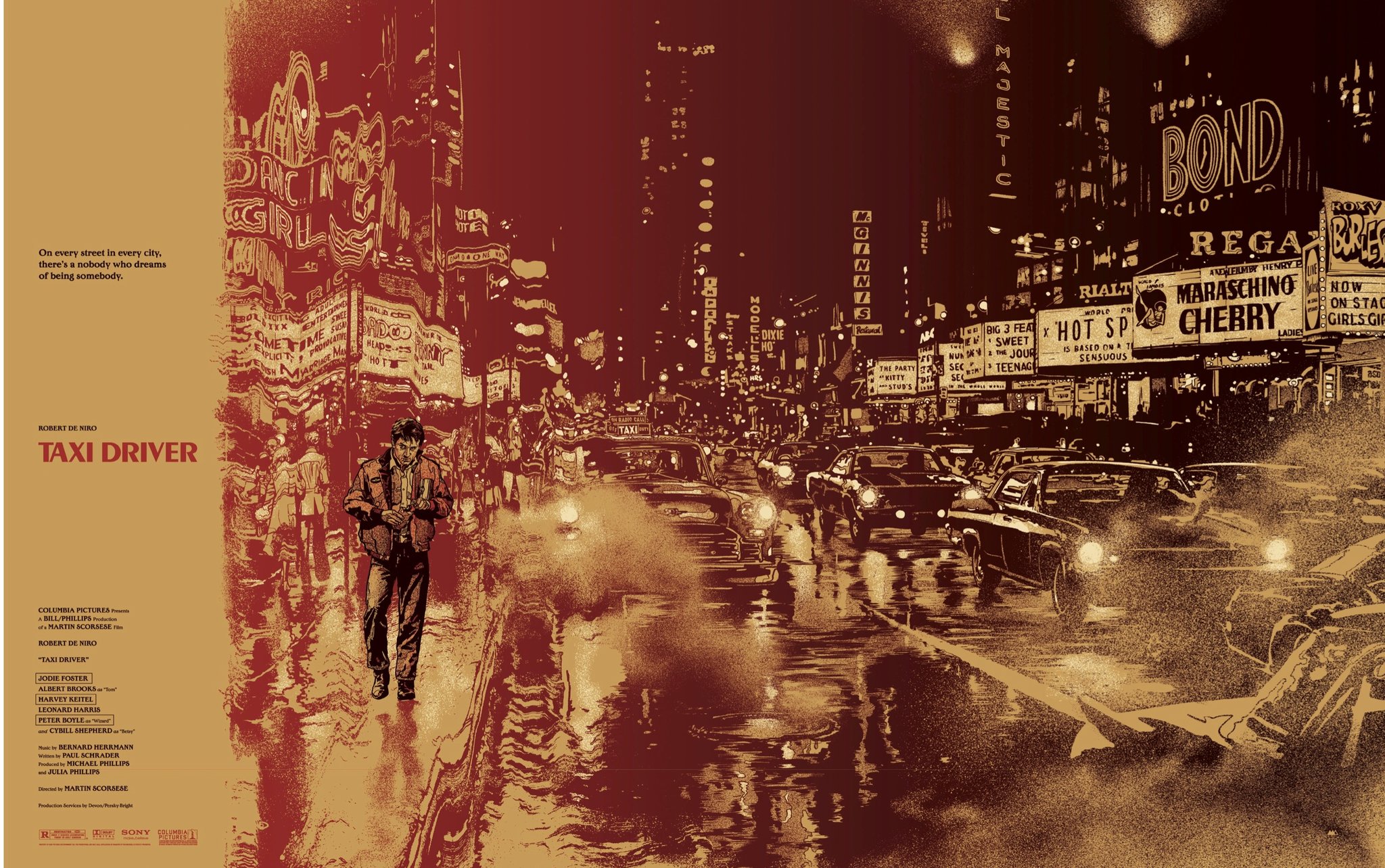 Mr. Ansin is a master of the heroic image, be the heroes barbaric (“Conan the Barbarian”), metallic (“Iron Man,” “RoboCop”) or long dead (“The Mummy”). For a limited-edition poster of “Taxi Driver,” Mr. Ansin had to get special permission from Robert De Niro to use his likeness; look closely at the 42nd Street marquees, and you’ll see one for “The Party at Kitty and Stud’s,” Sylvester Stallone’s first and only foray into soft-core porn. Mr. Ansin’s take on the 1995 film “Ghost in the Shell” is as trippy and visually stunning as the anime original, a kaleidoscopic vortex of killer bots, freeways and special-ops agents, with the film’s heroic cyborg falling through its spinning heart.